I thought I'd share a little of myself today and talk about my favourite hobby. Roleplaying games and those who play them are often painted in a poor light in the media and in fiction. I know a lot of people reading this blog may never have heard of gaming or roleplaying, and many who have will probably only have seen it depicted as something teenage boys do in the basement when other kids are out playing sports. That stereotype, however, is pretty harmless. It's when people start to think these games are actually dangerous that problems creep in.

You see, back in the Eighties, roleplaying games were targetted by certain ultra-conservative groups in America. It became associated with devil-worship and cults. Some even claimed that the highest-ranking members of the cult believed they could discover real magical spells hidden in the pages of Dungeons and Dragons.

Well, I've been playing tabletop roleplaying games, or RPGs, since I was 14. In that time, I'll admit, I've met some socially inept people. But I have never met anyone who believed that rolling dice on a table and saying "I use my fireball on the troll" taught them how to speak to the devil and curse people.

So now we're clear on what roleplaying is not, let's look at what it is. First some definitions. Gaming is the broad term for playing a wide range of hobby games, from board games, to wargames, to card games. Roleplaying is one kind of gaming, and involves a group of people, usually sat around a table, who take part in a sort of shared storytelling. It's like a combination of playing cops and robbers and telling stories around a campfire. Most games tend to involve 3-6 people. One night of playing is called a session, and a series of sessions using the same characters and following an overall story is called a campaign.

Most of these players take on the role of a character. So you might have one person playing a knight, another playing a thief, and another playing a wizard. These are called Player Characters, or PCs, and each player acts out their role, like improvised theatre.

One of the players, instead of having just one character to play, is called the Game Master, or GM. Some games have different terms like Storyteller or Referee. It's the GM's job to act out the roles of all the other characters in the game, called Non-Player Characters or NPCs. The GM also comes up with a story for the PCs to experience. They're a combination of scriptwriter and director, playing the villain of the story and the people that the PCs must help or oppose to defeat the villain.

Each RPG has its own set of rules, which exist to define the abilities of the characters in the game. Dice are rolled to determine whether or not a player succeeds at a particular task, sort of like how in some boardgames you roll dice to see how far you move.

That's pretty much it. Different games have their own niche areas and genres. There are games for Lord of the Rings-style fantasy, police procedurals, historical settings, science-fiction, ancient myth, and horror. Many games are even licenced to use popular movies and books like Star Wars or The Dresden Files as their settings. Each group of players will have their favourites.

It's a fun, social hobby that encourages creativity and co-operation. One of the most common first questions about roleplaying games is "how do you know who wins?" But roleplaying games aren't typically competetive. You "win" by everyone having a good time.

The stereotype of the socially awkward nerd in his parents' basement obviously has some element of truth. Roleplaying games do attract teens who have difficulty in other social situations. Every hobby has people who reinforce negative clichés. But I've got several very large circles of friends, and most are gamers of one kind or another. They include PhD students, teachers, engineers, medical professionals, accountants, other writers, people who run their own businesses, even a member of the police. All in all, gamers are pretty normal people, we just got into a different set of activities when we were younger than other kids our age. There are definitely worse things to catch your kids doing than rolling dice and pretending to slay dragons. 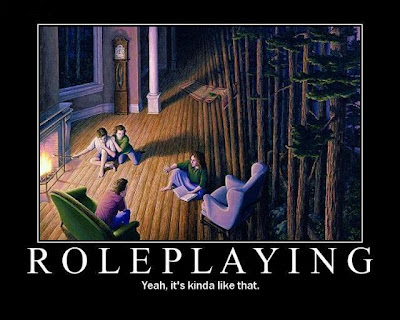