Today we continue our exploration of the hidden Santa Trilogy. We started with Santa Claus The Movie, and now move on to the mid-point.

When we last left Santa, things were pretty bad. Though BZ had been defeated, there was still the fallout to deal with. Christmas was becoming more commercialised and false. Santa himself was losing faith in what Christmas stood for. And even those who believed in Santa Claus were becoming sure that he was a phony.

What can Santa do to in this situation? You can't force people to trust you, even less so when you've just come out of your own crisis of faith. As I said in the last post, it will take a miracle... 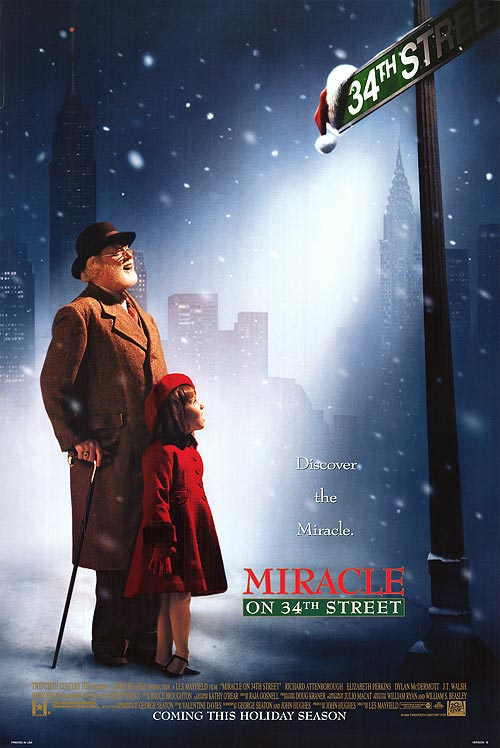 The man with the hat is back...

Miracle on 34th Street is a 1994 remake of the 1947 original, with the wonderful Richard Attenborough as Kris Kringle/Santa Claus. I've chosen this one, rather than the original, as it fits chronologically, coming after 1984's Santa Claus The Movie, and featuring some particularly heartwarming and relevant scenes and dialogue.

For the purposes of this analysis, even though the character goes by the name Kris Kringle for the duration of the movie, I'll refer to him as Santa Claus.

We open with Santa dressed as a normal everyday New Yorker (he obviously has a fondness for the city, having spent much of the previous movie there), going to attend the Cole's Thanksgiving Day Parade.

Interesting fact, although the actual Macy's name was allowed to be used in the 1947 original, and the store itself was featured, they refused to allow the use of the name for the remake. I guess they felt they had enough money. I believe the exterior of the store was at least used for many shots, though.

It's as if Santa is visiting the human world to see how things are now, maybe to recharge his enthusiasm and passion. It soon becomes clear that he hasn't completely lost his sense of what Christmas means when he sees the parade's Santa drunkenly stumbling into place as the parade starts.

After revealing the man's drunkenness to the special events coordinator of Cole's, Dorey Walker, the old Santa is fired and Dorey winds up desperately asking the real Santa to take his place. There's a subtle reluctance as he reaches for the offered red hat, but when Dorey reminds him of the children who will be let down if there is no Santa, he rises to the call.

Santa does such a great job being, well, Santa, that he's offered a job in the Cole's 34th street store. He even gets his own suiting-up scene, just like all heroes should have.

It isn't long before Santa comes to the attention of Victor Landberg, owner of Shopper's Express, a rival store to Cole's.

Now tell me this guy doesn't look like an older, more embittered version of John Lithgow's character from the previous movie. He even warns his lackey that "anachronisms" like Santa have a way of causing problems, almost as if he's had dealings with such things before.

It's possible that BZ survived, returned to Earth, and changed his name, to build up a new evil empire. But I'm not completely confident making that assertion based on only a couple of lines of dialogue and an absent hairline. Still, it's something to consider.

Santa also encounters Dorey's daughter, Susan, played by one of the most well-adjusted child stars in history, Mara Wilson.

Dorey has been quite firm with Susan that there is no such thing as fairytales and Santa Claus. So Susan is quite a stern, serious child, who desperately wants a traditional family, since her dad ran out on her mom years ago. She is quite taken with Santa, and his charming demeanor and genuine kindness begin to break down her cynicism.

Santa makes it his mission to prove to Susan, and her mother, that he is real, and should be believed in. As he says to Dorey:

"I'm a symbol of the human ability to be able to suppress the selfish and hateful tendencies that rule the major part of our lives. If you can't believe, if you can't accept anything on faith, then you're doomed for a life dominated by doubt."

By this stage, Santa wants to be believed in again. He only hopes it's not too late, and if he can start with these two people, there's a chance for Santa Claus to endure.

One of the key moments in Susan's growing faith in Santa, and my personal favourite scene in the movie, is when a woman brings her daughter to see Santa at Cole's, and explains to him that her daughter is deaf, and she just wanted to see him.

Santa looks down at the child, and for a moment, his smile falters. His eyes wilt. See, Santa Claus has incredible powers, but those powers have rules. They have a specific purpose. He can't make a deaf girl hear, or a blind boy see. That's not what Santa Claus is for. And it pains him that this is so.

So he does what he can to bring joy and wonder to the girl. He sits her on his knee and speaks to her using sign language. Her face lights up and they sing Jingle Bells together, and he tells her she'll get what she wants for Christmas.

Yes, it's the most heartwarming, tear-jerking thing ever, and I'm not sorry for crying.

Susan is so wracked with doubt as to her mother's insistence that Santa Claus isn't real, that she agrees to test Santa, and asks him to give her a specific house, a father, and a baby brother. Now, as I mentioned, this sort of thing is outside Santa's power to simply give, so he has to do some legwork...

Of course, Landberg wants to discredit Santa and divert customers from Cole's to his own store, so that his financial interests can take over the floundering company and add it to his retail empire. He has his lackeys follow Santa, to determine if he's potentially crazy. Santa has let his guard down amidst this newfound resurgence of popularity, and does himself no favours. He is seen talking to reindeer and mentions how he can slow down time, and enjoys playing golf with the Easter Bunny.

The fact the Easter Bunny exists, and usually spends winter in New Zealand, is something to note for Part 3.

The lackeys set Santa up, having the man he replaced at the parade provoke him in the street.

Santa strikes him with his cane, and the man fakes a serious injury. Landberg's lackeys show up and make a show of announcing his name to the gathered crowd, and Santa is arrested.

Just when things were starting to come around for Santa, now the whole world watches as he's branded a violent, mentally-unstable old man. Worse, we learn that Landberg plans to bribe the judge in the case, to make sure Santa gets locked away.

But all is not lost! Bryan, Dorey's sort-of-but-not-quite-boyfriend, is a lawyer, and decides to take the case and defend Santa. Not only will he prove that his client is not dangerous, but that he is in fact the one true Santa. 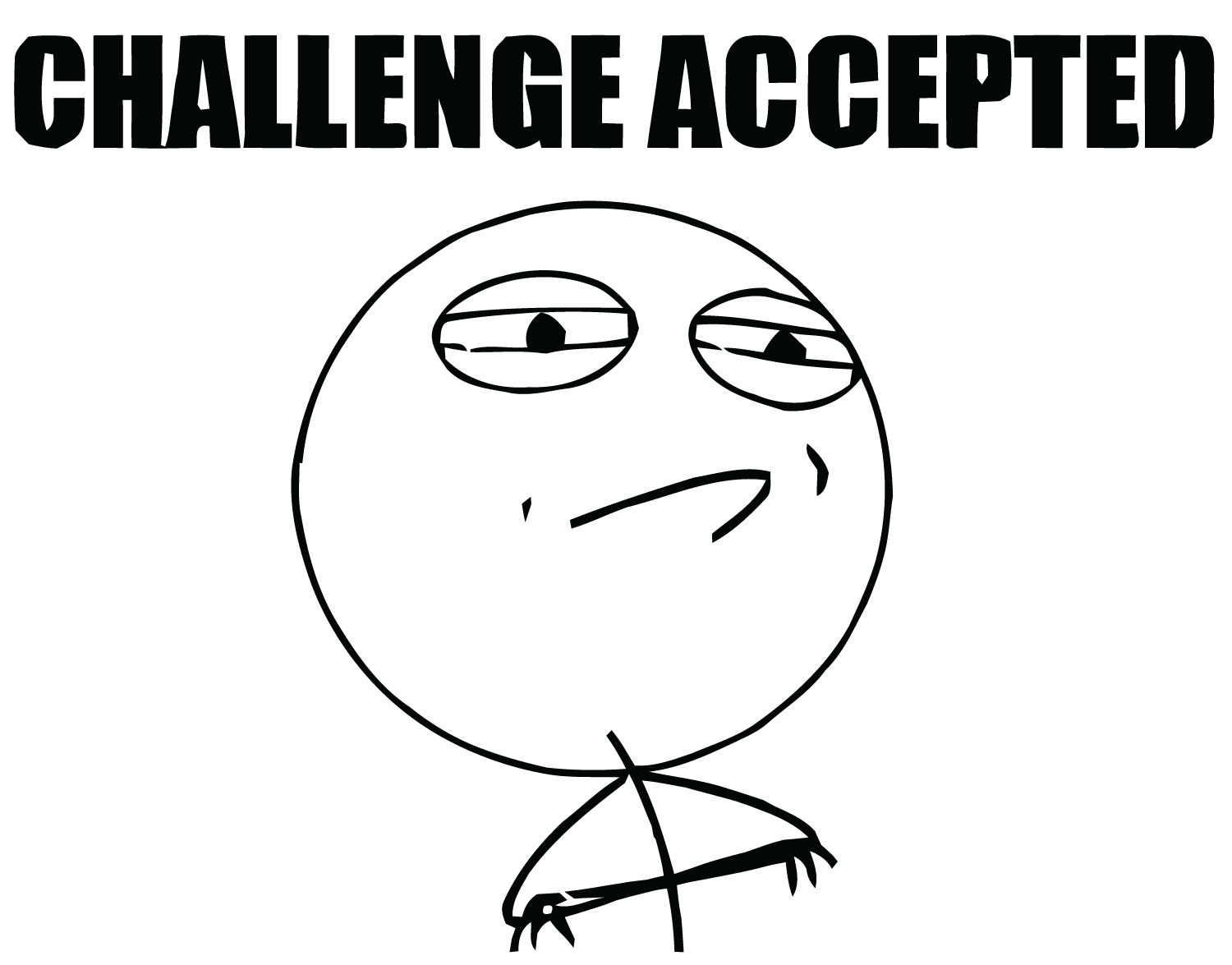 Of course, the challenge isn't in proving that Santa isn't dangerous, it's proving he's not insane for believing that he's Santa Claus. Bryan tries a range of tactics, but for every win he makes against the prosecution, they win one back when Santa continues to act, well, crazy. Even the judge, who wishes he could let Santa go free, says there is no way he can rule in favour; the law ties his hands.

During the trial, however, both Susan and Dorey come to support Santa completely. Dorey goes to her superiors and urges them to support Santa, giving them the rallying cry, "Do you believe in Santa Claus?"

Cue montage of New Yorkers posting signs and notices announcing their belief in Santa, to Aretha Franklin's rendition of "Joy To The World" (remember how that was used to fanfare Santa's first flight in the previous movie?). And yes, also cue more tears from me, because damn if I don't love seeing New Yorkers stand up for people.

So the entire population of New York flocks to the streets of Manhattan and cheers at the stroke of noon on Christmas Eve, to announce their solidarity and believe in Santa Claus. Then it starts to snow (all Christmas miracles cause spontaneous snowfall), and the judge realises (with a little extra help from Susan and the one dollar bill) that it was the will of the people of America that allows the nation's currency to say "In God we trust" and so he can, through a similar act of will from the people, carry forth their decision to believe in Santa Claus, and set Santa free.

Okay, that ruling could probably be all kinds of contested, but by the end of the movie, even the prosecutor doesn't want to put Santa away, and asks him to not forget to stop by his house that night.

The faith of the people restored, Santa gets ready to set off on his night's work. As it happens, he did manage to put a few things in motion, and arranges for Bryan and Dorey to get married, and ensures that Dorey's Christmas bonus is put towards buying the very house that Susan wanted.

As for the baby brother... Well, let's just say there are some things you don't have to ask Santa for...

So everything's okay, now, right? Santa's back and the world believes in him, and the spirit of Christmas, once again.

Not so fast. There are other threats out there, and old fears have a way of creeping back...
Posted by Paul Anthony Shortt at 12:29 PM