Who Ya Gonna Call?

I only learned yesterday that what is perhaps the most iconic firestation in the western world is due to close this summer. Hook & Ladder 8, the firestation used in Ghostbusters and Ghostbusters II, will close on July 1st. 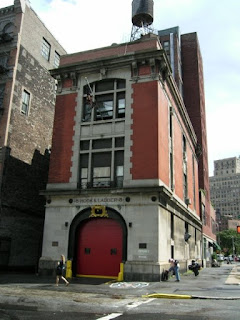 It's part of a budget measure to save New York City approximately $55 million by closing 20 fire stations in the greater New York area. The merits and flaws of this decision, in terms of finances and public safety, have been debated by people far more qualified than myself. All I can really contribute is my sadness that such a landmark building will no longer serve in helping to keep the people of New York safe.

I grew up on Ghostbusters. When I was 8, that's what I wanted to be when I grew up. I specifically wanted to go to New York, buy that firehouse, and become a Ghostbuster, logic be damned! Even today Ghostbusters has such a special place in my heart that my wife and I made a point of going to see the firestation when we were in New York on our honeymoon (I took that picture above). The father of Nathan Shepherd, the main character in my novel, is an ex-firefighter who worked at Hook & Ladder Co. 8. So I guess I have this double sadness, realising that the place that was Mike Shepherd's second home, his calling, is closing.

I hope, whatever happens to the building, that it remains a New York landmark, and that whoever now comes to own it treats it with the repsect worthy of a building that has both served the public for over a hundred years, and is such a cultural symbol. 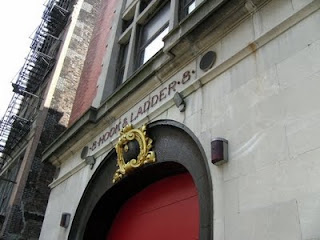 I wonder, can I see Nathan moving in?
Posted by Paul Anthony Shortt at 12:32 PM