Here's a bonus blog post for you guys, the cover for Silent Oath! I swear, my jaw dropped the moment I first saw it. It's like the designer read my mind. Only a few days before I saw it, I was saying to Jen how it would be awesome if they put Elena on the cover in the same style as Nathan on Locked Within. I love how it establishes a consistent theme for the series. Couldn't be happier with it. 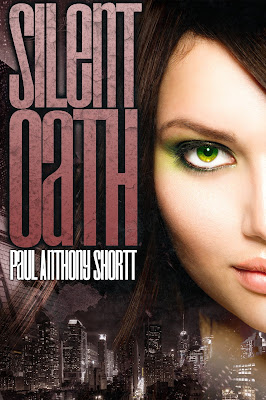 Nathan's only chance to uncover the memories of his previous existence, and to conquer these new forces of evil, lies in Elena DeSantis. A woman he has fought beside in past lifetimes. A woman he has loved.

Together, Nathan and Elena are the only future their city has.

Incidentally, Silent Oath is now also up on Goodreads, so you can add it to your shelves, and it should be available for pre-order on Amazon in a couple of days.
Posted by Paul Anthony Shortt at 9:26 PM