We reach the end of my Watch & Learn series focusing on the Star Wars prequels. I do plan to write a post on The Force Awakens (for which I'll return to the positive lesson format), but I want to see it again first, so it might have to wait until it's out on Blu-Ray.

Class is in session.
I'll own up, I was actually pretty psyched for Revenge of the Sith. And it isn't a terrible movie; it's certainly the strongest of the prequels. Unfortunately it still wasn't the return to form we were hoping for, and suffers from several problems that detract from the audience's experience.

Mistake 1: Too little, too late
In all honesty, Revenge of the Sith has some strong points. It absolutely covers events that truly matter for the overall Star Wars saga. And it has some well-conceived (if poorly executed) set pieces. We even get some halfway-decent defining moments such as the opening battle sequence and the execution of Order 66

But really, the movie suffers for the poor performance of the previous two instalments. This might seem like an unfair judgement to make, but it's so important to keep in mind as you write. It doesn't matter how well you can pull off a particular scene or climax, if the rest of the story doesn't hold up, you will lose your reader. It's very hard to bring a book, or a series, back from truly disappointing moments.

Mistake 2: Poor Character Progression
The end of a series is supposed to be the culmination of all that has come before it. The pay off for the reader, a reward for their commitment to the series. As part of that, characters need to evolve along natural lines, which feel like an organic part of their arc. Revenge of the Sith absolutely fails in this. 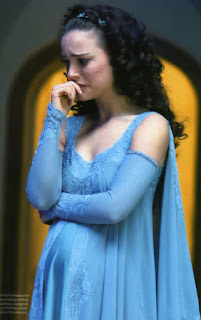 Padme is easily the most obvious example of this. The decision to make her heavily pregnant for the duration of the movie leaves her relegated to utter passivity. What was once a character who dived into battle and fought for her people is now a character completely unable to affect the plot. This is doubly painful to see because we should also be seeing the birth of the Rebel Alliance in this movie, and Padme would make an excellent early Rebel leader. What's worse is that scenes covering this were filmed, but ultimately cut from the movie.

It also bears mentioning that somehow her marriage to Anakin has remained a secret for several years, and yet we see nothing to suggest that anyone has even a passing interest in her pregnancy. Padme is a senator, a major political figure always in the public eye. Where is the scandal? Where is the sense that Padme and Anakin have had to work to keep their marriage hidden? 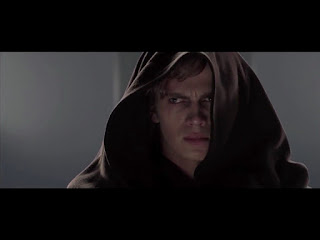 Anakin likewise suffers from poor writing. In the course of the movie, he goes from hating the Sith to not reporting Palpatine to the Jedi when he reveals himself as the Lord of the Sith. He also switches from trying to save Padme to using the Force to strangle her, in full knowledge that she is heavily pregnant. While this shift in character could be believable, and very compelling, it all happens too quickly. We're not given any justification for Anakin's sudden turn to pure evil.

Mistake 3: Poor Dialogue
To be bitterly honest, Hayden Christensen completely kills ever scene he is in, and I don't mean that in a positive way. His delivery is so dead and devoid of real emotion, it wouldn't matter how well-written the scenes were or how well his fellow actors did their jobs. When he's on screen, he is failing to deliver to us this epic, but flawed, hero who falls to darkness.

Why this matters to a writer is because dialogue can be a difficult thing to master. While you don't have to worry about an actor giving a poor performance, you do need to consider how well you write your dialogue. A bad set of dialogue will stand out, and if it becomes a habit you will quickly drive away readers. Keep your dialogue compelling and believable at all times.

Prime examples of this can be found when Anakin kills Dooku, and when Anakin becomes angry that the Council will not promote him to the rank of Jedi Master. Anakin comes across as petulant and sulky, not as though these events have had a deep and damaging emotional impact.

Mistake 4: No Connection to Characters or Plot

The original Star Wars trilogy gave us one of the most iconic villains in movie history, with Darth Vader. His recurring presence throughout each movie, always a force that could match and outdo the heroes, meant huge audience payoff for his final confrontation with Luke. Even the Emperor's presence could be felt across the three movies, despite him having so little screen time before Return of the Jedi.

Unlike the original trilogy, however, the prequels suffer from new characters being introduced in every installment, and quickly killed off or forgotten. We see this in the death of Count Dooku, and the introduction of General Grievous. Of these two primary villains, only Dooku has any chance of having a connection with the audience, and he is quickly killed off before the main plot of the movie has begun. This leaves the audience looking to Grievous as the movie's villain, but as he's never been seen before, he means nothing to us. This is another point where I'll repeat that you can't rely on supplementary material to give your readers a reason to care about your work. Each book you write should be enough, in and of itself, to hold a reader's attention and make them engage with your characters.


Another problem presented by both Dooku and Grievous is that they serve as a distraction from the real villains: Anakin and Palpatine. Revenge of the Sith is meant to be the final stage of Anakin's downfall, and large portions of the plot are dedicated to characters who have no real bearing on that. Dooku's death is rushed and delivered without gravitas or emotion, while it is Obi Wan who pursues and eventually defeats Grievous.

Unfortunately, by trying to play the identity of Darth Sidious as a mystery despite the audience being aware that he is Palpatine, the movie, and the series as a whole, loses many opportunities to display Palpatine as the villain he is. The reveal then, when Anakin learns the truth, lacks any impact. It's set up as a stunning revelation, but we already know it's coming. It's vital to keep in mind what your readers know of your characters and not treat them like they're limited to what your main characters know.


Dramatic irony is a powerful narrative tool, and it looks bad when you fail to employ it correctly.

Mistake 5: An Irredeemable Tragic Hero
Going into this movie, you know you're going to see Anakin do evil things. It's simply how a redemption arc must go, so there's an amount of pre-emptive forgiveness which the movie can depend on. However, it's important when writing such a story to not push your readers too far. While every reader will have their own personal limits about what they can and cannot forgive of a character, there are some things which should be obviously risky to include. 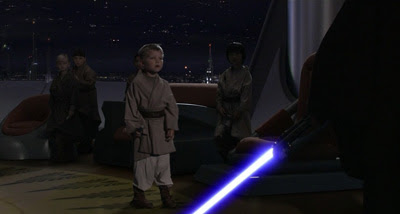 The murder of children is something which many people could never forgive a character for. Regardless of the character's justification, the reader will always have it in mind that they killed a child. So when Anakin is shown igniting his lightsaber in the room full of young Jedi trainees, he crosses a line. Now, no matter what part he later plays in defeating the Empire, he will always be remembered as the man who killed a room full of children.

What's worse is this is not the first time Anakin has killed children. Remember that in Attack of the Clones he murdered the children at the Tusken camp. It's a somewhat telling inconsistency that the narrative presents the death of the (all human, as far as are seen onscreen) children as a mark of Anakin having turned evil, while killing Tusken children was framed as an impulsive, but forgivable, act.

TV Tropes has a section called Broken Aesop, which fits this contrasting set of circumstances well. The narrative sends the message that killing children is forgivable if they look different enough to you.

Mistake 6: Dragging Out Your Climax
Endings are tricky. Move too fast, and it'll feel rushed. Take too long, and your readers will get bored. Revenge of the Sith suffers from a terribly bloated and drawn-out climax, showing us the much-anticipated duel between Anakin and Obi Wan, and a largely pointless fight between Yoda and Palpatine.

Taking the Yoda and Palpatine fight first, this sequence was really unnecessary. We know neither Yoda nor Palpatine will die here, and the fight doesn't establish anything new about the characters, nor does it set up anything that will become relevant in the original trilogy. It really is there solely to show off more special effects. Not to mention, if Yoda was concerned about how powerful Palpatine is, surely it would make more sense for Yoda and Obi Wan to team up and take down the Emperor, the greater threat, before going after Anakin?

Anakin and Obi Wan's duel, on the other had, is incredible important. The entire prequel trilogy has been building towards this. Unlike so many other parts of the movie, there is huge audience buy-in for this fight scene. This is what the audience is there for. It should be one of the most thrilling moments in Star Wars history.

Their duel, from the moment Obi Wan reveals himself to Anakin's dismemberment and immolation, is a staggering eight and a half minutes long. That's 6% of the movie's total running time. In book terms, that would be equivalent to a fight scene that lasted at least 2 whole chapters, or roughly 24 pages. That's a frankly obscene length of time. And much of the fight is spent putting the characters into increasingly absurd positions for no reason other than to keep the scene running.


As a result, by the time the fight ends, the audience is exhausted. There's no sense of urgency or triumph/defeat. All the build-up is spoiled because the scene has run on too long, leaving the moment a fairly bitter disappointment.

So, that concludes our Watch & Learn series focusing on the Star Wars prequels. It's been interesting re-visiting these movies, particularly to note the contrast between them and the originals. Don't worry though, Watch & Learn will be back. There's still a lot to learn.