I thought I'd take a break from my usual writing topics and today talk about being Irish. More specifically, what I feel it means to be Irish following our first state visit from a British monarch since the Republic of Ireland became a free state.

Here's the thing. A lot of the famous Irish writers wrote about Ireland. Being Irish, living in Ireland, the struggles of the different classes before, during and after the Irish War of Independence. A lot of the books, plays and movies about Ireland have relatively straightforward plots and characters, the creative focus being on the distinct Irish charm.

I'm not that kind of writer. I know where my strengths lie, and they don't lie in harnessing solid Irish wit and attitude.

But I do know that to me, being Irish means having a long and proud artistic heritage. We have some of the most imaginative and creative people in the world, a wealth of talent which is all too often left untapped. So many talented people let self-doubt or cynicism stop make them give up without a fair shot. It's sad to see, because I think the majority of Irish people are wonderful, caring individuals who could do amazing things for themselves, their loved ones, even the world, if they could set aside the unfortunate Irish attitude that there are better people for a particular role than us, or that some things are beyond them or deserved more by someone else.

Then we have the ignorant minorities who would turn a solemn, historic moment like this: 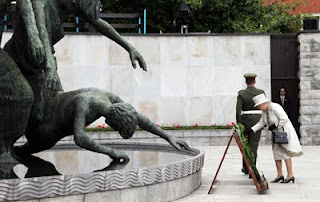 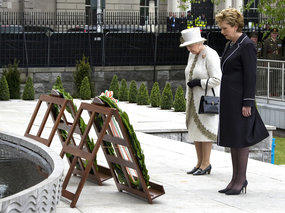 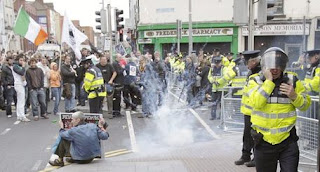 The two top pictures are of Queen Elizabeth paying her respects yesterday at the Garden of Remembrance in Dublin, a memorial to those who died fighting for Irish freedom, standing alongside our own president, Mary McAleese. I don't believe it can be stressed enough how significant this is.

The bottom picture is from violence which broke out during what should have been a peaceful protest to the Queen's visit.

I fully respect the right to protest. What I have no time for are ignorant thugs who just want to start a fight. They are not protestors, and their actions darken not only the reputations of those who went to protest in a peaceful manner, but those of every Irish person, everywhere. It's sad to see a momentous occassion like this marred by the actions of these few.
Posted by Paul Anthony Shortt at 1:30 PM