So Friday was the 13th, but here in Bray it was the morning of Saturday the 14th that had the crazy stuff happening.

First up, myself and my wife's favourite pub, the Vevay Inn, caught fire. It's believed that someone set fire to a wheelie bin at the back of the building, but there wasn't much the fire brigade could do other than keep the blaze from spreading. Pretty much all that's left are the outer walls: 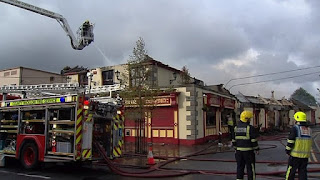 We're really sorry to see the place go like this. We knew the staff well and liked them all. It's a really rough blow.

Later that same morning, the following happened down at the Bray beach:


That isn't fake. That's a small tornado drifting very close to the shore of the beach in Bray. Thankfully it died out before it touched down or caused any harm. Still though, that's pretty scary.

Anything else crazy happen this weekend?
Posted by Paul Anthony Shortt at 11:30 AM