I'm a huge Dresden Files fan, but I buck the trend in that the twelfth book, Changes, didn't really do much for me by comparison to the previous eleven books. Still, the ending left me desperate to find out how Harry's story continued and what was going to happen to the characters I've spent the last several years coming to love. It was with no small amount of trepidation that I cracked open the first page of the latest in the series, Ghost Story. 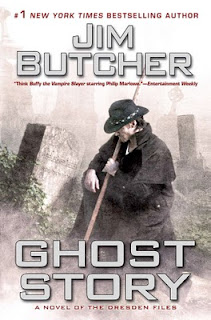 The following review contains some spoilery details, particularly about the end of Changes and the set-up for Ghost Story.


Picking up after the events of Changes, Ghost Story details Harry's return from the grave and efforts to solve the mystery of his own murder, while at the same time protecting the loved ones he left behind from the new threats which have grown in his absence. However, as a shade, he has no way to affect the physical world, no access to his magic and there are few in the city he can even communicate with.

The book tells some important parts of the ongoing story of Harry's world. We get to see how things have changed for the worse in Chicago, without Harry Dresden as a deterrent, and with the power vaccum left in the wake of the Red Court's desruction. If you've read the novella Aftermath, which is excellent, by the way, you'll have some idea of what's happening. The sections of the book dealing with how Harry's friends are doing and the flashbacks to Harry's past are the strongest parts of this book. The need to know how everyone was doing kept me turning pages and cursing the fact that I had to go to work each day. Harry learns to accept that he made terrible mistakes in Changes and has to deal with the consequences of his decisions. These make up some of the most powerful scenes in the book and alone are worth the price of purchase, assuming you're already a fan of the series.

The story itself - the two major plots Harry finds himself caught up in aside from the issue of his murder - felt more like a couple of Jim Butcher's short stories brought together. The actual plot rather pales compared to the depth and emotional engagement of previous titles and while the book itself is quite long, it feels as though not much actually happens. As with previous books, a number of points raise questions that aren't answered here. This is a bit of a sticking point for me, because there's an awful lot happening in the Dresdenverse at the moment and whole books can go by before we learn anything new.

The revelation of Harry's murderer, and who they were working for, takes place at an unusual point, interrupting the climax while not actually furthering the plot or providing anything that helps to resolve the situation. I felt this was a bit of a let-down as it broke the pace and took me out of the narrative at an important moment.

The book ends with a sense that what was achieved by Harry's actions, if anything, has yet to be revealed, and I'm not really sure how things are going to go. Ghost Story feels like it could easily be a goodbye to certain characters, or at least an indication that we won't be seeing them nearly as often in the future. In fairness, the series has a lot of supporting characters and there just hasn't been the time to see enough of them when they're all getting crowded into the same book.

If someone has not read any of the Dresden Files up to now, this is not a good book to start with. Too much of it is carried by the connection the reader has built to the characters over the series. That said, there are still a good number of awesome Dresden moments where you want to cheer the characters on.

As a final verdict, Ghost Story is great to read to catch up with what's been happening and see how Harry's past made him the man he is. The ending suggests that a lot is going to change and that perhaps we'll see less of Chicago and the characters there in the future. This really saddens me, because "hard-boiled detective with magic" is what first made me fall in love with the series. If I'm right, I think I'll really miss those elements and the series will have lost something golden.

Yes, Harry Dresden will be back, and the forces of evil will be running scared. But for the first time, I have finished a Dresden Files novel and not been desperate to see what happens next.
Posted by Paul Anthony Shortt at 11:55 AM