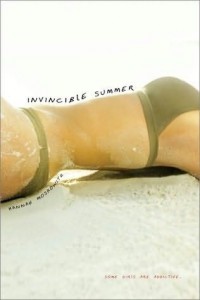 
Now, Invincible Summer is not the sort of thing I typically read. But Hannah Moskowitz is awesome and following her on Twitter attracted me to her work.

We follow Chase, second eldest of a large family, over the course of four summers spent at his family's beach house. He and his siblings swim, play on the beach and roam the boardwalk. Their neighbours for the summer, the Hathaways, seem so close the families' teenage kids all assume they'll end up married to one another some day. However beneath the picture postcard exterior lie deep-seated problems which slowly envelop the summer and transform Chase's life forever.

The two families live in a state of denial about their own problems, leading to Chase playing the mature brother while his older brother Noah runs off for days on end and his young sister Claudia experimenting with displays of sexuality far beyond that which is appropriate. Finding comfort and guidance in the writings of Camus, Chase hides from his own maturity and uses memorised quotations to avoid developing his own sense of self.

Things just get worse when Melinda Hathaway takes an interest in Chase, while she's supposed to be seeing Noah. Their relationship is dangerous and manipulative. Melinda's use of Chase as a way to handle her own problems turns her into the primary face of the true antagonist - the beach itself, which allows Chase's family to run and hide instead of growing strong by facing their problems.

Through the course of the novel, Hannah Moskowitz excellently portrays the highs and lows of a teenage summer, from the initial sense of dread at the start of the holidays for fear it might not live up to expectations, to a teenage boy's feelings that being a virgin for even one moment longer will be a detriment to his lifelong happiness. There are several wrenching moments where members of Chase's family come so close to figuring out where they're going wrong, but then lose it again.

If I have any complaint, it's that the ending, while incredibly powerful, doesn't seem necessary. Chase's eventual realisation and salvation could come from the events leading up to, and including, how his relationship with Melinda ends. Still, while the climax comes a little out of left field, it is powerful enough not to take away from the overall story, and the effect it has on the characters feels true.

Invincible Summer really hit home for me, especially the climax and how the fallout is handled. It left me feeling a little numbed from the emotional trauma. I felt so much for Chase. He doesn't deserve the things that happen to him. I hope things get better for him when he goes to college.
Posted by Paul Anthony Shortt at 11:55 AM