With just over a week to go until Red Skies hits the digital bookshelves of Amazon, I'm feeling very excited. Hard to believe we're nearly at the halfway-point for Cora's story. 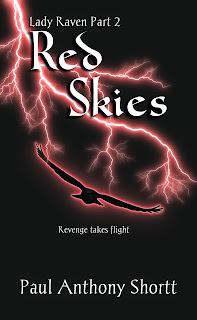 Many of you will know that I use music as a major source of inspiration while I write. Usually I'll have a list of a few songs that form the soundtrack for the particular book I'm working on, but with the Lady Raven series, things have been a little different. Perhaps it's because I'm self-publishing, or because I've known for a while know how each book is going to go, but when I listen to music and think of these books, I find myself regarding the whole story, not just the individual books.

So, while the song I'm sharing here definitely portrays Cora's determination and attitude following the events of Lady Raven, it will also have an ongoing influence on how the story continues. Indeed, it's already inspired the tagline for the final book.

For now, though, this song, Fireflight's "Unbreakable", is Cora's theme song, as she comes to terms with the things she's lost and the battle still ahead of her.


Red Skies will be released on July 1st. Pre-order your copy now!
Posted by Paul Anthony Shortt at 10:42 AM