The Legend of Raven and Swan - Lady Raven Excerpt

Today I've got an excerpt from Lady Raven, in which Cora thinks over the legend of Raven and Swan. This myth is a key point for the series, and one of the foundations of the Empire's teachings.

In this scene, Cora, along with her friends Dee and Laden, have snuck into her mother's study during her father's wake. They hope to learn what Cora's mother is planning, but they have been discovered by a young priest, Astor, and Cora needs to distract him while Laden searches her mother's documents... 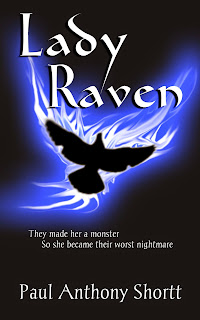 But of course, there's more to the legend than the Empire allows people to know. If you want to learn the truth behind the myth, you can find out in Lady Raven, or sign up for my mailing list, and receive a sneak look at a later scene in the book tomorrow, where Cora finds out what really happened between Raven and her sister.

Posted by Paul Anthony Shortt at 10:24 AM