We move on today to what I anticipated being the most difficult movie in my Hero's Journey Challenge, Terry Gilliam's 1985 black comedy, Brazil. 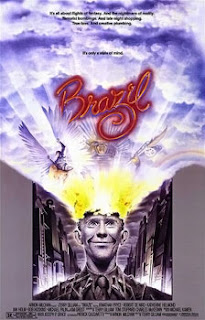 We begin "Somewhere in the 20th century," in a world of a grossly over-bearing bureaucracy. The government insists that 13 years of terrorist bombings are nothing but "beginner's luck" and all paperwork instructions are followed without question under the assumption that nothing can go wrong, despite such things happening in a horrifying manner when a man named Archibald Buttle is accidentally arrested, violently taken from his home by armed police instead of another man named Archibald Tuttle, all because a fly gets into a printer.

We are introduced to Sam Lowry, our hero, a government employee who has recurring dreams of the same mysterious woman. His Mundane World is a grey apartment where he depends on malfunctioning technology to get him through tasks as simple as making tea in the morning, scarcely noticing when the devices fail and just carrying on with his routine.

Call To Adventure: Sam is happy in his dull day to day life, until his mother arranges a promotion out of the Department of Records and into the Department of Information Retrieval, which he has just discovered made the mistake which led to the wrongful arrest of Archibald Buttle.

Refusal of the Call: Content to live in obscurity, Sam tries to convince his mother to stop interfering in his life, but she insists that he needs to move further in his career.


Supernatural Aid: His apartment suffering from malfunctioning air conditioning, Sam is "rescued" by the real Archibald Tuttle, an outlaw heating engineer (yes, I actually typed that!) and suspected terrorist, who he helps avoid detection by two Central Services workers, Spoor and Dowser.


Crossing the First Threshold: Faced with the problem of an interrogation refund cheque for Buttle that can't be lodged because he died during interrogation, Sam does his boss a favour by taking the cheque to Mrs. Buttle so she can sign it and cash it herself. He drives to the run-down apartment complex where she lives.


Belly of the Whale: In the Buttle's apartment, Sam sees Mrs Buttle utterly distraught over her husband's death and is attacked by her son. He sees their neighbour, Jill Layton, who looks exactly like the woman he has been dreaming of. He decides that he must accept the promotion to Information Retrieval, essentially his Talisman which gives him the authority to act. Through his dreams, we see him struggle with his personal desire to find Jill, and his growing moral obligation to help the Buttles.


Road of Trials: Sam has to deal with numerous problems while looking for Jill, including the incompetent bureaucracy, Spoor and Dowser ripping open his apartment in retribution for him letting Tuttle fix his ducts, his mother's meddling in his social life, and his quest to find out who Jill is using his newfound resources in Information Retrieval.

Temptation: Sam's mother and her best friend Alma are desperate the fix Sam up with Alma's daughter Shirley, a quiet and socially inept girl who Sam seems far from interested in. Representing the dull progression through society that Sam is loath to indulge in, like everything else in this bureaucratic nightmare world, the Temptation is a failure, particularly since she doesn't even like him!


Meeting With The Goddess: Getting Jill's file from his friend Jack, an interrogator in Information Retrieval, Sam learns that Jill is due to be taken in for interrogation. Under the guise of his new role, he helps Jill escape. Despite a rocky start, Sam is devoted to the angelic figure from his dreams, eventually falsifying her records to make her seem deceased. The two spend the night together before being found and arrested.


Rescue From Without: With Jill dead, and about to be subjected to torture at the hands of his friend Jack, Sam's mind snaps and invents an imaginary reality to escape to. In his delusion, Sam is rescued from torture by Tuttle and a band of terrorists who help him flee the Information Retrieval facility.

Atonement with the Father: Or mother, in this case. Sam encounters the controlling influence in his life one last time, seeing her at the funeral of her friend Alma, who has had one cosmetic surgery complication too many. Now though, his mother, looking young and almost just like Jill, rejects him.


Apostasis: Sam tumbles into an open grave at Alma's funeral and falls into darkness, shedding even the imaginary form of his living self.


The Ultimate Boon: There is no happy ending in this story, not outside of Sam's own mind. It was always in his dreams that Sam was more assertive and forceful. Here he is reunited with Jill and the two escape together. Now, left catatonic from torture, Sam is finally free to live entirely in his fantasy world.

A Failed Calling? Looked at from another perspective, you could make the argument that Sam's journey failed at the start, and the rest of the story is his punishment for this failure. It's not uncommon to see heroes who refuse their Call to be punished, either in a literal sense by a superior or mentor, or in terms of the narrative itself showing that those heroes who refuse to answer the Call receive punishments to eclipse the rewards of those who accept their heroic destiny.

Looking at it from this point of view, Sam's Call To Adventure was the tragic situation he sees the Buttles living in. His Refusal of the Call is in pursuing Jill, the source of his Temptation, rather than trying to find out exactly what was done to Buttle and possibly making a stand against the failing bureuacracy. There are several points where Sam is shown battling with this moral choice.

However, despite what he's seen and how these things haunt his dreams, he focuses on Jill as a prize to be won. His lack of foresight and his selfish desires lead to Jill's death and his own arrest and interrogation. The story ends with him not as the hero he dreamed he could be, but as just another victim of a cruel, ruthless and bloated bureaucracy.
Posted by Paul Anthony Shortt at 11:58 AM