Here we are at the end of my Hero's Journey Challenge with by analysis of Bridget Jones' Diary. This probably isn't the kind of movie most people would think of when imagining Jospeh Campbell's Monomyth in action, but like the other examples I've dealt with, it has been remarkably easy to apply the model. 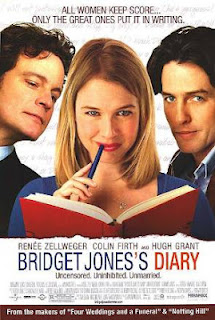 Naturally, spoilers follow. And there's some swearing in a quote from the movie.

As the movie opens, we see the Mundane World of Bridget Jones, a publicity worker for a publishing house in London. She's clumsy, often late for work, probably drinks a little too much, and her two main pastimes are worrying about her weight and fantasizing about her boss, Daniel Cleaver.

Call to Adventure: At her mother's New Year's turkey curry buffet, Bridget is re-introduced to Mark Darcy, who she knew as a child. Bridget's mother is clearly eager for the two to hit it off and become an item. Indeed, Bridget is initially very taken by Mark's good looks, but due to his abrupt demeanor and her social ineptitude, the two quickly come to dislike one another.

Following a series of mishaps after this, from being stuck in an elevator to her shopping bags ripping, Bridget decides to put her life in order.

Supernatural Aid: Bridget's eponymous diary serves as the chronicle of her attempts to improve herself, as well as offering both an outlet for her frustrations and validation for her desires. It becomes her friend and counsel, the guide to help her along the way.

Crossing the First Threshold: Bridget takes a risky move in responding to the flirtatious advances of her boss, Daniel Cleaver. The two start a passionate relationship, despite several encounters with Mark, who seems to have some remaining fascination with Bridget.

Belly of the Whale: After catching Daniel with another woman, Bridget leaves him and dramatically quits her job. Seizing the opportunity for a complete change in her career, she moves into television, becoming a successful reporter.

Road of Trials: Aside from dealing with her failed relationship with Daniel Cleaver, Bridget must also cope with her parents' marital troubles, the pressures of her new career, and coming to terms with her growing feelings for Mark, despite being led to believe that he stole Daniel's wife.

Meeting with the Goddess: The Goddess doesn't specifically represent a feminine figure in the hero's life, but rather a source of pure, devoted love. For Bridget, this is revealed to her when, at a friends' dinner party, Mark reveals to Bridget that, despite her faults, he likes her "just as she is."

Temptation: Daniel crashes a birthday dinner party Bridget is hosting for her friends, which Mark has managed to save from being a total disaster, making it merely a moderate one, instead. Daniel's assuming attitude regarding Bridget leads to Mark calling him out into the street for a fight. Though Mark wins, Bridget tells him off, confused over how Mark can seem so noble, but apparently pick a fight with the man whose wife he once stole. After Mark leaves, Daniel tries to win Bridget over himself, but she turns him down, telling him she's worth more than that.

Apostasis: Realising that she's been wrong all this time, Bridget rushes to see Mark at his parents' wedding anniversary party. She admits her feelings to Mark, but is crushed to learn that he's not only meant to be moving to a law firm in New York, but has also just become engaged.

The Ultimate Boon: When Bridget's friends come over to try and cheer her up with a trip to Paris, they are interrupted by the arrival of Mark. He reveals that he is not going to New York, and his engagement is off.

Master of Two Worlds: Seeing Bridget's diary, Mark goes out to buy her a new one, for a new start in the new year. They kiss and though Bridget at first comments that "nice boys don't kiss like that," Mark quickly assures her "oh yes they fucking do."

Posted by Paul Anthony Shortt at 11:33 AM