Day one of my Hero's Journey Challenge! I figured I'd start with what I consider the easiest title on my list. Run Fatboy Run might not be about larger than life heroes or epic battles, but I love it, and it's actually a pretty perfect example of the Hero's Journey. 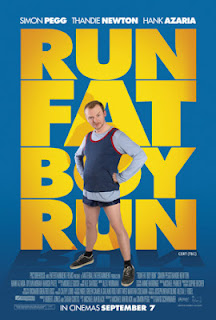 Obviously spoilers follow for those who haven't seen the movie.

The movie opens with Dennis Doyle running out on his pregnant fiancé, Libby, on their wedding day. Not the best start for our hero. We then cut to five years later and see that Dennis' life hasn't exactly been stellar since. He works as a security guard in a lingerie shop where he is disrespected by his boss and taunted by shoplifters. He lives in a basement flat, having a poor relationship with his landlord, Mr. Ghoshdastidar (who from here on I'll refer to as Mr. G, as they do in the movie) and his daughter Maya, due to being behind on his rent. He can't even manage to keep a promise to his son Jake and to make matters worse, Libby is seeing another man, the attractive and successful Whit. This sorry state of affair's is Dennis' Mundane World.


Call To Adventure: Dennis has been hoping for years that Libby would eventually forgive him and take him back. Seeing her with Whit makes him realise that he has to change in order for that to happen. Unfortunately he's not the brightest when it comes to figuring out how to improve himself, and in attempting to show off to Whit, he decides to run the upcoming marathon that Whit is running in.


Supernatural Aid: Upon committing to his task, Dennis is joined by two people who will help him succeed. These are Libby's cousin, and Dennis' best friend, Gordon, and Mr. G. While not literally supernatural beings, they fill important roles. Gordon, while primarily interested in the money he stands to make from a bet on Dennis simply finishing the race at all, orchestrates Dennis' training, while Mr. G gives Dennis a present of new running shoes "to help you be a better man." In effect, these shoes are Dennis' talisman, the artifacts which give him authority to act and begin to set him apart from the man he used to be.


Crossing the First Threshold: For Dennis, this is as simple as his first early-morning training sessions with Gordon and Mr. G. As with most sport-related movies, the hero is initially in poor shape and unable to keep up the pace.


Meeting with the Goddess: Ordinarily this scene would not come so early, but in Run Fatboy Run it takes place within the movie's first act, when Dennis has returned home having locked himself out yet again and is afraid that he could lose Libby and Jake to Whit. Mr. G invites him up for a cup of tea and shows him what is probably the first unconditional acceptance he's had since leaving Libby. Mr. G explains that Dennis was scared he wasn't good enough for Libby, but admits he had the same fears about his own marriage. He tells Dennis that he must have earned Libby's love once, that he is a good man and he can make himself good enough if he tries.


The Belly of the Whale: Dennis and Gordon go to Libby's birthday party at Whit's towards the end of the movie's second act. While it takes place relatively late, this is Dennis' final separation from the world he knew before. He is deep within the territory of Whit, his antagonist, who dismisses Dennis' hopes of finishing the race and reveals his belief that Dennis could never have had a successful relationship with Libby. The last of Dennis' ordinary world collapses when Whit proposes to Libby in front of all their friends.


The Road of Trials: Throughout the movie, Dennis has several tasks to overcome in order to reach his goal. The most straightforward of these is his training, which he maintains over the course of the movie, steadily improving his fitness. Next is the challenge of actually getting a spot in the race. The race is only three weeks away, so his only hope is to get in by running on behalf of a charity. While his initial attempts fail drastically, culminating in an attempt to slip in under the guise of a fake charity for a fake medical condition, Dennis and Gordon accidentally injure a man who was supposed to run on behalf of Erectile Dysfunction Awareness, and Dennis takes his place. Finally, Dennis has to face his own immaturity and realise that running the marathon won't make Libby take him back, but it will be something that, for once, he will see through to the end, and that will be enough.


Temptation: Unlike many heroes, Dennis is not tempted to give up for some great reward, but rather by the realisation that he could run, finish the race, and still lose Libby, who is noe engaged to Whit. He decides to quit the race, even though this means he is going to be kicked out of his flat and alienates him from Gordon.


Atonement with the Father: The father figure in heroic myth typically has almost ultimate power over the hero's world. In this case, the most important thing in Dennis' life is his son, Jake. In an inversion of the normal dynamic, Dennis' atonement comes when he has to look for Jake, who has run away over a girl he likes in school. Finding his son safe, and explaining to him that you can't just run away from problems because that doesn't solve them, makes Dennis realise that he can't give up. Even if it doesn't win Libby back, even if he's been kicked out of his flat, he needs to run the marathon and finally finish something that he started.


Apostasis: During the race, Whit trips Dennis, injuring him. Despite this, Dennis keeps going, long after every other runner has finished, limping along the route. This gathers him an ever-growing group of supporters following him, including of course, Gordon and Mr. G. Along the way, however, he "hits the wall," and doesn't think he can go on. Imagining a large wall blocking him, he sees a brick fall away and looks through to see a mirror image of himself urging him on. Remembering all the things he gave up on in the past and all the reasons he's doing this, Dennis breaks down the wall and carries on.


The Ultimate Boon: This movie is nothing if not full of feelgood moments. With the finish line just a short distance away, Dennis trips and falls. Exhausted, he can hardly go on. Until, that is, Libby and Jake appear on the other side of the finish line. His strength renewed, Dennis gets to his feet and sprints the last stretch, collapsing into Libby's arms with Jake proudly announcing "Dad, you won!"


Master of Two Worlds: Some time later, Dennis goes to spend some time with Jake. We learn that he is still running and the people in Libby's neighbourhood are now friendly to him as he passes by.


Freedom to Live: Finally, rather than waiting for some great act of forgiveness, Dennis asks Libby if she would like to have dinner with him. She happily accepts the invitation and Dennis goes to play football with Jake and Mr. G.
Posted by Paul Anthony Shortt at 10:06 AM