For the second of my challenges, I've got the dystopian classic, Soylent Green. I'm ashamed to admit I haven't seen this until now. 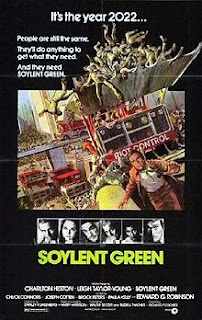 Spoilers follow, but I'm pretty sure everyone in the world knows this movie's big reveal.

We start with the dreary, overcrowded world of New York in the year 2022. Robert Thorn, a police detective, lives with his old friend Sol, who helps him with his cases. We're very quickly shown the problems of overcrowding, lack of stable electricity, and food shortages as Thorn gets ready for his night shift. This is Thorn's Mundane World, surviving along with everyone else, always aware that any day he could lose his job and end up starving.

Call to Adventure: Thorn is assigned to investigate the murder of William R. Simonson, a director of the Soylent Corporation which produces the population's staple food substitutes, Soylent Red, Soylent Yellow, and Soylent Green.

Supernatural Aid: Thorn's friend Sol is old enough to remember a time when you could walk into a store and buy fresh food, when books were printed freely and there was enough room for people to live. With his age, experience, and research skills, he grants Thorn insights and knowledge that would otherwise be far beyond his means.

Crossing the First Threshold: Thorn's lieutenant, Hatcher, serves as his primary Threshold Guardian, the figure he must overcome or appease to progress further into the unknown. After checking in, Thorn crosses the first threshold by paying a visit to the apartment of Simonson's bodyguard, Tab Fielding. Here he encounters an armed doorman who acts as a secondary Threshold Guardian, albeit one that it easily overcome by Thorn's police authority. Once inside he questions Fielding's mistress, Martha.

Belly of the Whale: Returning to Shirl, Simonson's former concubine, for more questions, Thorn interrupts her having a get-together with her friends. Surrounded by excess the likes of which he can only dream, Thorn is now completely taken away from the normality of his own world.

Road of Trials: Faced with the suspected assassination of a man who was secretly involved in the creation of Soylent's food substitute products, and working with almost no resources, Thorn's task is daunting. Along the way he has to deal with his superiors wanting him to give up the case, the priest who heard Simonson's last confession being murdered, and riots due to shortages of Soylent Green, during which an assassin makes an attempt on his life.

Temptation: Like any good detective story, this one features a beautiful women to get in the hero's way. Shirl is "furniture," a high-class concubine who used to work for Simonson. From their first meeting, Thorn is drawn to her. While she does not intentionally take him away from the investigation, her presence in Thorn's mind is a distraction which can cloud his judgement. Her access to more food and facilities than Thorn can possibly use only makes her more appealing. As an additional form of Temptation, Thorn regularly helps himself to items from places he visits during his investigation, highlighting his self-interest in pursuing his work, rather than a sense of duty.

Meeting with the Goddess: As her connection with Thorn deepens, Shirl comes to be more than just a temptation. She represents something better than surviving day to day, something good which was until now missing from Thorn's life. She provides aid, Simonson's apartment serving as a Sacred Grove for Thorn to recover after the attempt on his life.

Atonement with the Father: Though ostensibly his employee, Sol is a father figure and mentor to Thorn. When Sol learns the truth about the Soylent Corporation he chooses to end his life at an assisted suicide clinic. Like many heroes before him, Thorn almost literally travels to the underworld to speak to his father figure at the border between the world of the living and the land of the dead. While watching the video of the natural world which is long gone, Thorn finally understands what humanity has lost and the pain Sol has been suffering through for so long. Sol's act is not without purpose, however, as it allows Thorn to follow his body to where he can finally see the truth for himself.


Apostasis: In this case, Thorn metaphorically casts off his mortal guise, stowing away with the dead as the dystopian ferrymen, waste disposal workers, cart the bodies off to the Soylent plant. It is here that Thorn sees for himself what's really going on.


The Ultimate Boon: The most powerful of weapons and heaviest of burdens is the truth. At the Soylent plant, Thorn sees that Soylent Green is in fact made from the bodies of the dead. The Soylent Corporation, providing food for over half the world, is feeding people their own dead.

Magic Flight: Armed with the truth, Thorn must escape the plant and find his way back to the city so he can reveal the secret of Soylent Green. He escapes to the church where Simonson gave his last confession. Though wounded by a gunshot, he manages to kill Fielding.

Rescue From Without: Responding to his phone call for help, Hatcher and several officers arrive to help Thorn, and he reveals to them that the oceans are dying, there is no plankton like they say, and Solyent Green is made out of people.

Freedom to Live: With overpopulation, drastic food shortages, and a devastated eco system, there can be no real freedom to live in this world. The only real freedom is the truth, the clear conscience that comes with it, and the choice to end one's life. Can the Soylent Corporation be stopped? Probably. The real question, left unanswered, is whether or not mankind can survive the moral choice.