We come to the second last of my titles for this challenge, Last of the Mohicans. 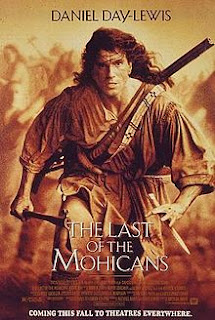 The year is 1757, during the French and Indian War. We meet our hero Hawkeye and his adoptive father and brother, Chingachgook and Uncas, hunting in the forest before stopping off at the Cameron household. The three intend to travel to Kentucky. Hawkeye's Mundane World is already under threat, however, from both the invading French and the British military who are intent on drafting the men of the frontier farms into service.

Call to Adventure: Hawkeye and the others come across Cora and Alice, daughters of the British general Munroe, along with Duncan, a soldier who wishes to marry Cora, being led by the Huron, Magua, into a trap. Hawkeye, Uncas and Chingachgook act quickly, saving them from the ambush.


Supernatural Aid: Though he has no mystical abilities and receives no major outside aid, Hawkeye was raised by the Mohicans. He combines his unmatched skill as a rifleman with his knowledge of the land, making him a formidable warrior.


Crossing the First Threshold: Taking Cora, Alice and Duncan to Fort William, where Munroe's forces are stationed, Hawkeye finds the Cameron farmstead burned and the family killed. He sees here that the home he once had is no more, and he must press on.


Belly of the Whale: Once inside Fort William, Hawkeye learns that Munroe has no intention of honouring a promise made by another officer to let the farmers return to their homes should they come under attack. He decides that, war be damned, he will help the farmers desert the fort, but stay behind himself to make sure Cora and her sister are safe. In doing so, he is arrested for sedition.


Road of Trials: On his journey, Hawkeye must lead people through hostile French-controlled land undetected, help a British messenger seek help for Fort William, assist in the desertion of the farmers, and finally try to keep Cora and Alice safe from the Huron. His success in this is not consistent, and not only is Fort William lost because General Webb refuses to send aid, but Munroe himself is killed by Magua and Hawkeye is forced to shoot Duncan out of mercy when the soldier sacrifices himself so that Hawkeye and Cora can escape the Huron.


Meeting with the Goddess: Cora, presented with both purity and a fiery spirit, is a strong match for Hawkeye. Both seem out of place where society expects them to be. Each of them find peace, freedom and strength when in the wild. It is his feelings for Cora that lead Hawkeye to stay, and eventually prove to the Huron that Magua's wishes are for his own gain, not for the good of the tribe.


Temptation: Hawkeye has his chance to escape along with the other farmers. However he knows that it is important for him to stay in Fort William, if only to ensure Cora's safety. The hero resists the temptation of leaving behind the road of adventure and stays the course.


Apostasis: When Magua captures Cora, Alice and Duncan, he takes them to a Huron village to ask permission to execute the women and end Munroe's bloodline in revenge for the loss of his family. Hawkeye enters the village, unarmed, and negotiates for their release. When the elder chooses to have Cora burned alive, Hawkeye asks that his life be taken instead, as his death will bring greater honour to the Huron. Although Duncan intentionally mistranslates and offers himself instead, Hawkeye's willingness to sacrifice himself lets him transcend his mortal bonds and gain strength unmatched by his Huron enemies.


Atonement with the Father: After killing Magua and avenging Uncas' death at his hands, Chingachgook speaks to his ancestors, declaring that he is the last of the Mohicans. Hawkeye turns to his adoptive father and realises that his life does not have to be ruled by his loyalty to Chingachgook. In effect, Chingachgook is freeing Hawkeye from the responsibility of keeping the Mohicans alive, something which both realise is now impossible.


The Ultimate Boon: For Hawkeye, this act allows him to be with Cora and to go where he pleases. He has been given the greatest gift of all. Freedom.

I have one more movie to do, since I couldn't find a copy of Outsiders. On Wednesday I'll be looking at the monomyth in Birdget Jones' Diary, for a look at a hero's journey about as far removed as possible from the kinds of male-centric stories we've been dealing with previously.

Also there will be no blog post this Monday as my wife is performing in a gospel choir competition on Sunday and I'm going along for support. It's a two and a half hour drive each way and the competition goes on all day as part of a festival, so I won't really have the time, or energy, to prepare a post.
Posted by Paul Anthony Shortt at 1:30 PM